Walking slowly, The little light-haired kid continued humming and peeking here and there, looking for something to strike his curiosity and maybe find fun in the process.

His dad was asleep on the couch, same for Ritta; sleeping next to him. Larissa was over at a friend’s house for lunch and his mum was working in the kitchen.

Suddenly he heard the garden’s front gate open. He know it’s his older brother, and he also knows all people are off limits when it comes to Yaldar, but he walked fast to the window overlooking the front yard to take a peek.

Yaldar had a thing in his hands; a cage. He sat down on one of the two steps that leads to the front door, still, with no movements. He was just sitting still staring inside the cage.

In short fast footsteps, Black kept going back and forth between the kitchen looking at the back of his mum and the front door’s window peeking at Yaldar and his cage. After a few times, he stood right behind his mother moving in his place. He couldn’t contain his excitement. Grabbing his mother’s blouse he gasped;

His mother looked at him smiling; “oh? Yaldar is back?”

She knew Yaldar was going to bring the rabbit of his friend for a couple of days to look after him while he’s outside the city. She carried Black in her arms and started walking towards the garden.

Yaldar was startled and looked up when the front door opened. Black kept looking at the cage all excited trying to get away from his mother’s arms. She sat down next to Yaldar and put Black between her legs;

“Your little brother wants to welcome Mr. White there”

Black grabbed his mother’s blouse and moved a foot back. Yaldar looked at him then opened the cage and carried the rabbit in his hands. Black sneaked a look from his place at the rabbit and started breathing loudly from his mouth.

“From the nose remember?” His mother said poking his nose but Black had his eyes fixed on the rabbit he didn’t give much attention to what she said.

Yaldar placed the rabbit on his lap and Black wasn’t sure what to do next. Whether it was because of Yaldar or the rabbit, it wasn’t clear, but Black was clearly intimidated by one of the two, or both.

The rabbit was intimidated as well and sitting still over Yaldar’s thigh. Black opened and closed his fists, he let go of his mother’s blouse and moved his hand slowly towards the rabbit. When his palm was an inch away from the rabbit’s head, Black grabbed at his mother’s thigh, pressed his lips and touched the rabbit’s head then gasped; “haaaaaaa!” with a very amazed look on face. He moved his hand across the fur and patted his head then, all of a sudden, like he remembered where he was and who he’s with; he pulled back and wrapped his short arm around his mother’s waist, half burying his face in her sides. 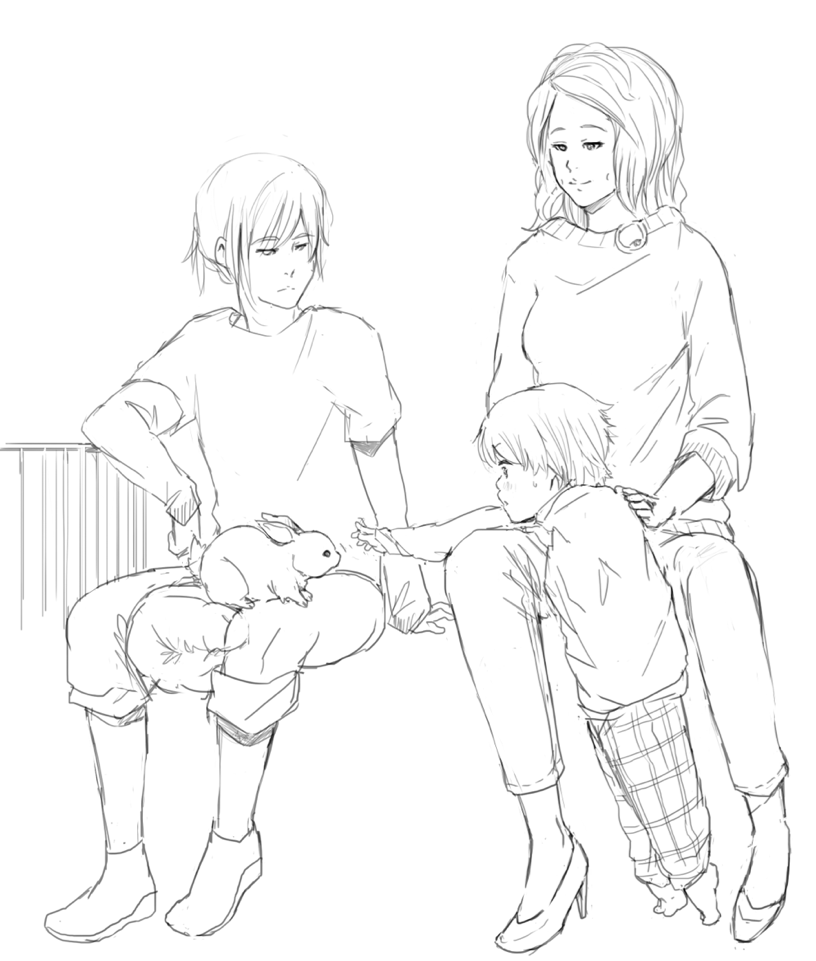 “Come on inside, your dad is asleep. I’ll prepare lunch now”

“I had lunch with Inad and Isa.” Yaldar replied.

Their mother looking sad turned around towards the house while Black took a glance at the rabbit as Yaldar placed him inside the cage. Waving and being sure Yaldar wasn’t noticing the secret eye-contact with the rabbit; he whispered;