“This is…. disturbingly quiet…”
I walked slowly from the window across the empty dark room.
“Um…”
I didn’t know whether I should call out his name or look around for the fun of it some more.
He used to do it often when we were kids; hiding from me whenever I show up. I knew where he’d be, naturally, but it was fun to act like I don’t.
We were never creative with games as kids.

But, the air in the room tonight, didn’t feel as playful. And he stopped playing that game time ago, anyway.

Maybe I should call out his na-
Maybe I don’t need to.

‘Found you~‘ Smiling, I thought.
With light steps I moved towards the closet and opened both doors. I was never one to peek.
There he was, sitting knees up close to his chest. He was wearing- wait, is that my hoodie or Yaldar’s?

Okay. Maybe this is not the right time to ask.
Clearing my throat I said to the still boy in front of me,

“Need for a more personal space?”

Black didn’t look up and in a low voice he said;
“Invade it if you like”

I sighed and moved some hanged clothes to a side and sat down across him in the closet.

Without a single movement he cut me with the same low tone,
“Not only people who are scared hide. People who do wrong hide too”

I frowned.
This is the most absurd thing I’ve ever heard.
Black, does a lot of-… things, one might consider bad or wrong. But I know he doesn’t do them out of ill intentions. He’s just spontaneous and doesn’t think his actions through.
And I can tell what kind of wrong he feels he’s doing.
And it’s the furthest from being true.

“If you mean you’re wrong in feeling guilty. then yeah, you need to hide”
“…”

Sooner or later.
This was bound to happen.

Feeling like you deserve what’s happening to you.
Feeling that you’re the one at wrong for  fighting back.
Feeling you did bad to live such dark days.

It was bound to happen.
But…

“Don’t put that face!”
Black’s voice tone went a little higher and stronger, cutting through my trail of thoughts.
He took me surprise that I know my face changed instantly to widened eyes and open mouth.

I wonder what face I was putting before.

He looked at me with eyes that were a bit hurt, a bit sad and a bit angry.
I looked back at him with a serious expression.
“Black, I know a certain someone that should be hiding in the closet now. Not you. Never you.”

He looked away with the same distant look in his eyes.
I was a bit disappointed that I didn’t get the regular broken smile reply of his.
He must be really hurting and truly feeling guilty.

A thought crossed my mind. A way to lift his spirit somehow.
It might make him feel guilty still, but it will be, at least, the right kind of guilt, or something.

I moved from my small space in the closet to a tinier space next to Black, who had his eyes opened, gasp escaping his lips, startled of my sudden movement. He never liked sudden movements.
I slipped between the inside back of the closet and Black’s shoulder, closing my eyes, saying;
“Then I should hide with you, for I’m just as wrong”

I wanted to open my eyes. See if he’s showing any signs of his usual self. But I didn’t. I needed to stay in this silly act of mine.

His raspy voice came through the darkness,
“But you’re never wrong.”

I opened one eye, hardly making any of his features, It’s darker on this side.

“I am. If you’re thinking that you’re guilty here, then I’m doing a lousy job convincing you otherwise. Which makes me at wrong, too” 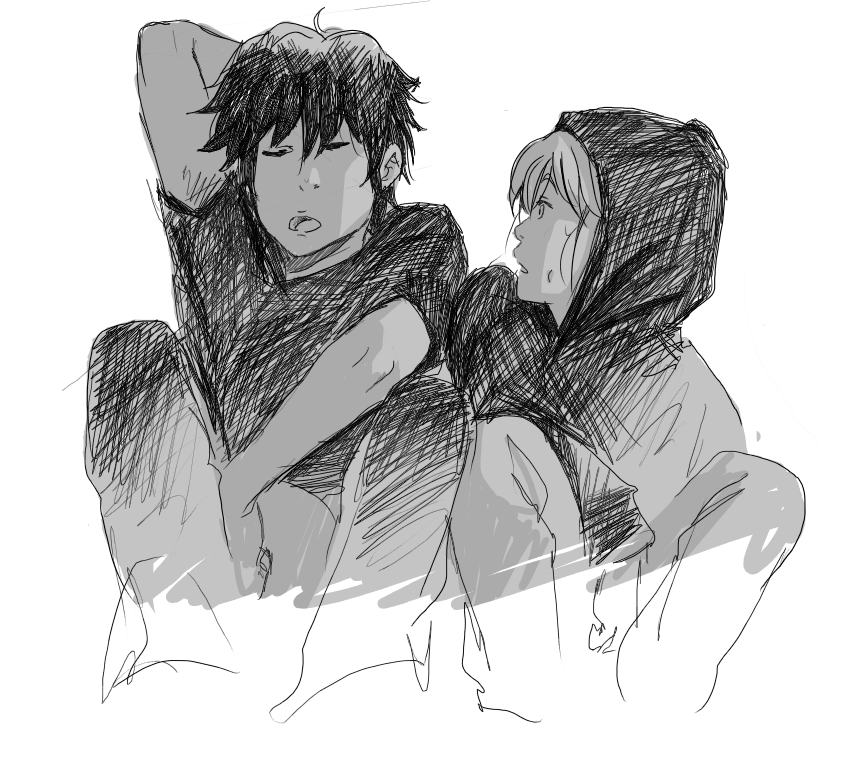 No reply came from him.
Was he guilty?
Did I make him feel bad- worse now?

Silence stretched long between us until I lost the sense of time and I wasn’t able to predict what time it is. It was too dark to check the watch too.
I just hope I won’t fall asleep.
oh, maybe he is.

“It’s funny”
Then Black decided to prove me wrong,

“funny how when bad things like being punched in the face for a lame reason makes me feels like I did wrong and feel guilty as hell, but then, when I have someone as good as you, I forget to feel that I did right and feel blessed.”

I knew, silence will stretch longer from there on. I…
I honestly don’t know what to say.

“White.”
There he breaks the silence again, with his enthusiastic usual voice,
“I can’t see your face here! I’m sure you look puzzled as fu-
“What did I say about foul language?”
“Come. OOONNNN!!! Pretty sure you have your everyday unconcerned face now! I wanted to see your flustered one!”

Flustered! What is he saying!
“Hey White! Are you glaring at me now? Coz I said something that you don’t like and you decide to act like I’m just making up stuff?”

“Black.”
“Don’t act tough now! I’m sure I touched your heart somehow with-”
“Black! It’s hot in here and you have bad breath!”
He stood up and went his way towards the light switch quickly,
“Haha! Hot you say! you’re blushed too then!!”
“When was the last time you ate! You breath smells like….”

I hope.
I can only hope,
He wouldn’t feel any guilt anymore.

I’m honestly running out of ideas to how to make him feel better.
Yet, I want him to.

So, I can only pray,
to have the strength for both of us.