The grey haired teen whispered his goodbyes to his best friends and turned to face their garden’s white gate. He heard Inad yell as he entered the house “don’t forget to call me!” then vaguely heard another of Inad and Isa’s arguments about God knows what.

Yaldar had his hands full with his school bag dangling from one hand and three fancy paper bags stuffed with small packets and greeting cards held by the other. Slowly he started walking towards his room, passing the kitchen where his mother is working he whispered “hey” and continued his way to his den.

The 6 year old boy was behind Yaldar’s bed head. Standing, he still wasn’t visible for any comer into the room. Black was putting both of his hands over his mouth to contain his excitement. He’d been waiting for his brother to get back home all afternoon; to surprise-greet him. Because it’s his birthday today.

He heard footsteps drawing nearer and nearer towards the room and he pressed his hands harder over his mouth because he was going to burst in laughter any second now. Yaldar’s footsteps faded away and Black was confused, he peeked from behind the wooden board and waited wondering where did Yaldar go to.
A few seconds later, he heard the footsteps approaching again so he quickly reverted to his old posture with his back glued to the bed head.
Yaldar entered his room and placed his bag on the floor by the bed, and before he turned around to face the desk, Black jumped from behind the bed;
“HAPPY BIRTHDAYAAAAY!!! were you surprised!! were you scared?! did I surprise you?! did I?!”
The taller boy looked down at his brother with his shiny eyes and clenched fists. He held the bags in his right hand in front of Black’s face.
“I went to your room to give you these sweets that the girls gave me at school for my birthday, but you weren’t in your room so I figured you’d be here…”
Black in emotional confusion was always an interesting sight. He didn’t knew how to react at his brother’s statement. At one hand, he’s disappointed that he couldn’t surprise him but on another he’s so happy about the bags. In the end, he neglected both feelings and with wide sparkly admiring eyes he exclaimed;
“ALL THAT! People like you a lot! WOW”
Yaldar put the bags on the ground in front of Black and moved to the dresser to change.
“Can I give Rissa and Ritta?!”
“they’re yours, do whatever!”
Black started going through the bags “OH this card! Rissa is going to love it because of the flowers. hehe Ritta will roll her eyes at her to- OH! I like this choco!”
“Don’t open it he-” he felt tugging at his pants and looking down he saw Black holding that chocolate -he was excited to find- towards him.
“It’s your birthday! The teacher said that when you give something you like to another and you see their smile because of it, you’ll be happier than if you keep it to yourself!”
After a couple of seconds, staring at the kid by his feet, Yaldar gave Black a slight smile and kneeled down. He took a bite from the chocolate, patted Black’s head then headed towards the bathroom.
Black blushed and grinned widely then he ran towards the bags. He struggled a bit with carrying the bags, but in the end he grabbed them all three and pulled them over the ground outside the room calling out his sisters. 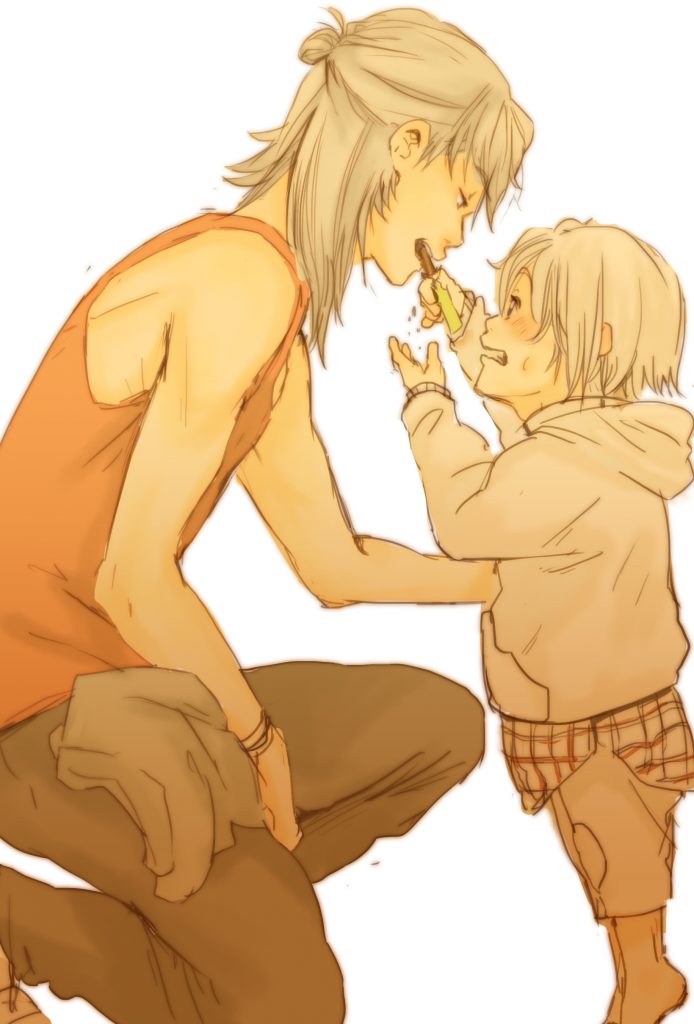